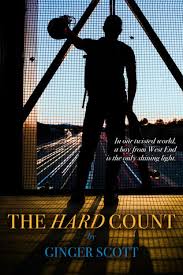 The Hard Count is one of those books that you have to re-read after finishing them. Right away. This book left me in what I think it’s called ‘book drunk state’, I don’t know. It’s the feeling of not being able to read anything else because you haven’t gotten over this one special book.

The main characters are so special and something different. Reagan is a strong and independent girl, a loner with a love for film. She comes from a good family, lives in a good neighborhood and her family is prestigious, but she knows that there’s more to life than that. Nico is a good boy from a bad neighborhood, he’s intelligent and never forgets his values. He has some special abilities and though he has seen some bad things growing up he doesn’t let them get in his way.

They built a bond so beautiful and I love that even though it seems they’re so different they’re more alike. They both grow together, and I love to watch them together.

It’s written from Reagan’s point of view but there’s a few chapters from Nico’s perspective that show us his past. I found them so mature and their romance doesn’t take up the entire book because they know there are more things in life. Also how they develop. I don’t know, I just think that I see myself in both of them, because I don’t usually like both characters.

Ginger Scott has rapidly become one of my fave authors, she sure can write some good books that gets to you. In this book may not be a lot of drama but it gets you all the same. You won’t stop reading once you’ve started it.

Nico Medina’s world is eleven miles away from mine. During the day, it’s a place where doors are open—where homes are lived in, and neighbors love. But when the sun sets, it becomes a place where young boys are afraid, where eyes watch from idling cars that hide in the shadows and wicked smoke flows from pipes.
West End is the kind of place that people survive. It buries them—one at a time, one way or another. And when Nico was a little boy, his mom always told him to run.
I’m Reagan Prescott—coach’s daughter, sister to the prodigal son, daughter in the perfect family.
Life on top.
Lies.
My world is the ugly one. Private school politics and one of the best high school football programs in the country can break even the toughest souls. Our darkness plays out in whispers and rumors, and money and status trump all. I would know—I’ve watched it kill my family slowly, strangling us for years.
In our twisted world, a boy from West End is the only shining light.
Quarterback.
Hero.
Heart.
Good.
I hated him before I needed him.
I fell for him fast.
I loved him when it was almost too late.
When two ugly worlds collide, even the strongest fall. But my world…it hasn’t met the boy from West End.